Kia ora koutou to all members and supporters of NZISM.... Members will be aware that this week was supposed to have been Safeguard Conference week and aligned to that NZISM had been scheduled to host the annual INSHPO Workshop and Board meeting over the weekend just gone. Obviously, this face-to-face event didn’t occur, however COVID didn’t stop the INSHPO Board meeting over the weekend with four separate events spread over 3 days. I had the unenviable task of coordinating the agenda for these events and trying to ensure that attendees were not too badly affected by the multiple time zones that had to be considered.

As these meetings were scheduled to occur in New Zealand the INSHPO executive agreed that we should stick with the New Zealand time zone as the base for the agenda items. The events started on Friday lunchtime NZ Standard time, as the executive team gathered for its normal monthly meeting. Attendees from Australia, UK, Canada and Singapore are included in this group. INSHPO recently changed the secretariat from an US based member (ASSP) to a Canadian based member (BCRSP) so we are in the final stages of transitioning the organisation's financial and business-related details from the USA to Canada.

A number of years ago INSHPO took a decision to put new membership applications on hold as they needed to develop internal structures, bylaws and systems. This decision got reversed last year and those member organisations around the world that had indicated an expression of interest in membership were contacted to reinitiate their membership application.

The Exec Committee therefore had a number of expressions of interest to consider, these included organisations from the UK, South Africa, Asia Pacific, New Zealand and Pakistan. The process was reasonably straight forward although some applicants will need to provide further information for us to proceed with the process. Overall however this is a great step forward for INSHPO as it progresses its goal of widening the membership base particularly to developing countries, organisations from regions where we currently have no geographical representative and to those organisations who may not necessarily meet all the full membership criteria, this last point is enabled through the creation of an Associate member level. The remainder of the meeting was involved in finalising process and content for the three meetings scheduled for the following days. 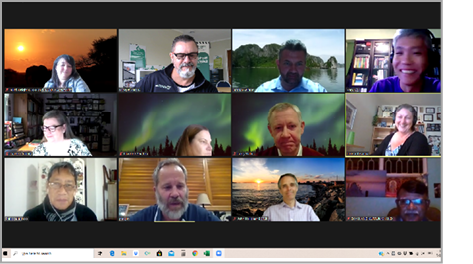 Saturday morning saw the full board plus a small number of guests attend the first of two workshops being held. This first one was really an opportunity for the group to discuss what each organisation has been doing over the last 12 months, there have been a number of personnel changes since the group last met in 2019 and so there was a chance to introduce each other and in their presentations pay particular attention to initiatives they are pursuing that promote the INSHPO Capability Framework and the impact that COVID-19 has had on each organisation. From an NZISM perspective I gave an overview of our progress particularly in the area of membership growth and demographics, the structure and systems that have been developed over the last 12-18 months, a commentary on the links with the capability framework and those who are using it including Victoria University and the Government Health and Safety Lead. I finished with some detail on the impact of COVID on membership and professional development events and detailed some of the steps we had taken to address this issue.

Continuing the New Zealand theme, we had our first guest speaker, Tina Patterson from the GHSL, whom some of you will know. Tina gave a very well received overview of what the GHSL is and how they came into existence including their goals for the future. This presentation was supported by how GHSL is using the Capability Framework and the other tools developed by INSHPO. It was great to hear another kiwi accent at an INSHPO meeting, but equally I always appreciate hearing from other member associations about their activities and struggles.

The AIHS have put significant focus on their certification programme over recent times which is seeing an increase in the number of certified members. There has been significant development in the OSHBoK with 21 chapters reviewed and 7 more chapters added. In Singapore, despite early success with restricting COVID cases, SISO is having a tough time with much of its income lost due to the impact of lockdown etc. Equally, INSHPO’s smallest member in Mauritius has been heavily affected by the lockdown situation, this didn’t stop them attending and contributing at all events at some very unsociable hours.

Moving to the Northern hemisphere and the USA, Canada and the UK. ASSP have had significant work to do to support their 39,000 members with ongoing professional development opportunities, IT, recording, scheduling and availability of presenters, which have all been issues they have had to address. There have also been some changes to their bylaws around who and how they provide representation on the INSHPO Board.

In Canada, BCRSP gave an update on their four pillars of Capability, Advocacy, Engagement and Operational Excellence, they discussed their relationship with CSSE, the delivery arm of their accreditation programme. And talking of CSSE, Eldeen Pozniak, whom some will know following her attendance at the HASANZ Conference in 2018, presented an update from this group. Similar in many ways to NZISM, CSSE is going through a number of governance and leadership changes with a new CEO recently starting and a new national president about to start. The organisation has made a number of changes due to COVID and has, like NZISM, supported its members in both professional development via webinar and also mental health support via weekly webinar chat sessions.

In the UK NEBOSH also has lost a lot of its workflow, particularly in the face-to-face assessment space where much of their income is derived. Despite this they are still makings strides in developing alternative ways of assessing and also have undertaken some work in creating both augmented reality and virtual reality course content.

Our third meeting and inevitable late meeting for New Zealand occurring between 9.30pm and midnight on Saturday. This workshop was focused on INSHPO’s efforts to support research projects that show Health and Safety Professionals have a positive impact in workplaces, or if research shows they don’t, what is needed to increase capability in the profession to enable that positive impact. The intent of the workshop was to craft hypotheses that we could submit to universities around the world who have an interest in undertaking such research which INSHPO would contribute to financially.

Very briefly, we were aiming to develop these hypotheses considering the value of health and safety professionals' technical vs essential (sometimes called soft) skills, their communication ability including across an organisation's hierarchy, in cross-cultural settings and in a wider diversity setting and finally the value of professionals having wider business skills. As part of this workshop we had invited Dr Joanne Crawford from Victoria University to speak and participate in this session and also had Joel Haight who is a Board member of ASSP and INSHPO and a researcher from Pittsburgh University with many years' health and safety related research under his belt. In addition, INSHPO have been in discussions with the HSE in the UK and Lloyds Register about funding opportunities.

I won't cover too much about our fourth meeting which was held at 10am on Sunday. This was the annual Board Meeting where we approved financial statements from 2019 and budgets and forecasts for 2020. We considered a couple of hardship requests from member associations related to their ability to pay membership fees; this hardship largely related to the impact of COVID. We voted on the new member applications as previously mentioned along with a minor change to bylaws enabling out of session voting. There was discussion around a new tool under development to support individuals' use of the framework through a self-assessment and of course we planned, as much as possible, for future meetings. All things being equal, we expect our next face-to-face meeting to be held during the rescheduled World Congress for Health and Safety in Toronto Canada in September 2021. We will, however, look to have another online session around October this year.

This was a very productive weekend with valuable input coming from all participants. There are a number of follow up items that will be progressed over time and I will update you on these periodically.

Finally I hope everyone is getting back to some sort of normality. It's great to be entering Alert Level 1 but remain mindful that the effects of COVID will be with us for some time, so keep being kind to those around you.

Thank you for joining the Women in Safety Excellence (WISE) network.

We hold various online and face-to-face events throughout the year and if one occurs near you, we would love to meet you in person.

LinkedIn - Please make sure you join our LinkedIn group to stay connected and on top of our planned webinars and events. We encourage you to post anything in the WISE group page that you think other network members would find useful or inspiring. Please don't be shy. The more we reach out, the more we connect with each other, and the more we can help each other on our journeys.

We might send you the occasional email but our web page on the NZISM website is always the best place to go for an overview of what's coming up in the WISE calendar.